It’s no longer just a theory – despite their denials (and reports from a few technical publications), major ISPs are ignoring net neutrality rules and throttling Netflix bandwidth.  Netflix has the proof in hand which they provide through their publicly-available monthly statistics reports.  Here’s how to find out if you’re being throttled by your ISP, why ISPs throttle network traffic from Netflix (and other competing streaming video providers), and what you can do about it.

The good – ISPs that do not throttle Netflix

First, take a look at some of the more noble ISPs, the ones that truly believe in net neutrality (the principle that Internet service providers and governments should treat all data on the Internet equally, not discriminating or charging differentially by user, content, site, platform, application, type of attached equipment, and modes of communication).  The graphs below demonstrate that for some, Netflix bandwidth, more of which provides a better customer experience for the video viewing service, have actually improved.  This makes sense.  As technology improves and ISPs settle into a normalized pattern of usage, general Internet connectivity speeds should increase.  Google Fiber, Cablevision, and Cox have normal looking bandwidth charts, constantly improving over time.

The bad and the ugly

Others however, particularly ISPs that offer competing video viewing services, have obviously begun throttling Netflix’s service (or as the ISPs will tell you, “letting it become congested” by not upgrading their network to accommodate growing Netflix traffic) and causing customers much-adverse headaches when using the Netflix service.  For most the throttling began in late 2013, when discussions over net neutrality laws hit Congress in earnest, and the worst offenders are not surprisingly, the big players – Verizon, AT&T, and Comcast.  The graphs below show the rapid degradation of Netflix bandwidth beginning in late 2013.

Overall, here’s how the ISPs stack up with regards to Netflix speed with Google leading the way and Verizon falling in dead last. 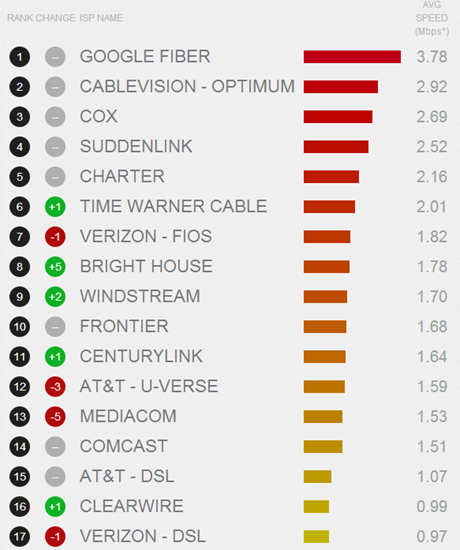 A new bill introduced in Congress explains why ISPs are incented to curb Netflix traffic.  The reason is pretty simple – to squash competition – and it’s no secret that the big three all offer competing streaming video services.

As for the ISPs listed up top that do *not* appear to be throttling – why not?  Cox cut their video streaming service in late 2013 and thus no longer has an incentive to throttle and Google’s “don’t be evil” mantra prohibits them from cutting the legs off of Netflix competition.

How do ISPs throttle Netflix?

Firstly, understand that your ISP is not throttling *you*.  They’re throttling Netflix traffic (or more accurately, Cogent Communications traffic – see below), which makes up a significant percentage of all Internet traffic across the United States.  In all likelihood, the ISPs “throttle” the traffic by routing all Netflix traffic through a limited number of ports.  You can pretty much tell who’s doing it not only by their availability of competing services (those that offer a competing service throttle Netflix) but by their response to Netflix’s offer to provide a performance-improving CDN (content delivery network) near the customer’s location.  Yeah, those with competing products threw Netflix’s CDN offer right back in their face.

As an example, the problem network ports in Verizon’s instance are the ports in their peer-to-peer link with Cogent Communications, a huge bandwidth provider for Netflix traffic.  According to Cogent:

“These ports typically send and receive data at speeds of around 10 gigabit per second. When the ports start to fill up (usually at 50 percent of their capacity), the internet companies add more ports. In this case, through, Verizon is allowing the ports that connect to Cogent to get crammed. They are allowing the peer connections to degrade.  Today some of the ports are at 100 percent capacity.”

Other ISPs will claim they throttle network bandwidth to alleviate congestion (if they admit to throttling at all) and given that the laws regarding whether or not an Internet service provider can purposefully limit speeds for certain sites (e.g. Netflix) is unclear, there’s really not much we can do about it.  Throttling ISP explained how ISPs in general, throttle Netflix services bandwidth:

“Normal web pages are transmitted using the HTTP protocol over port 80. Email uses IMAP and POP protocols. Meanwhile, filesharing services like BitTorrent and eMule use different ports and protocols dedicated for P2P sharing. YouTube, Hulu and other on demand video services also use a different protocol for delivering embedded video content. Likewise, video games will transmit data over their own ports and protocols. As such, your Internet service provider can make a very accurate guess as to what kind of content you are downloading and can quickly identify which types of content are hogging up all the bandwidth. To avoid degrading the experience for other users who pay the exact same amount for their service, they choose to slow down service for those using high data protocols and ports.”

As expected, Netflix caved and reached an agreement with Comcast.  Deals with AT&T and Verizon are reportedly in the works too.  As a result, Comcast should see its ranking in Netflix’s speed report begin to recover after the two reached an agreement that reportedly has the streaming giant paying the provider directly to ensure more bandwidth.

The agreement is a long term contract that will have Comcast connecting to Netflix servers inside third-party data centers and likely bypassing Cogent Communications.  In effect, Netflix is paying Comcast to open up additional ports for Netflix traffic and the throttling we’d been seeing was quite possibly a pressure tactic implemented during the deal negotiations.  The details of the deal are murky at best so it’s impossible to tell if Netflix prices will eventually rise as a result.  In fact, costs could actually be reduced if the Comcast deal proves more cost effective than the existing deal with Cogent.

First, find out if your Netflix download problem is really related to throttling.  The ICSI Netalyzr tool provides analysis of  your network and helps pinpoint network traffic related problems.  ICSIN is a browser-based java application hosted by Berkeley that runs in your browser.  The resulting network analysis report looks like this: 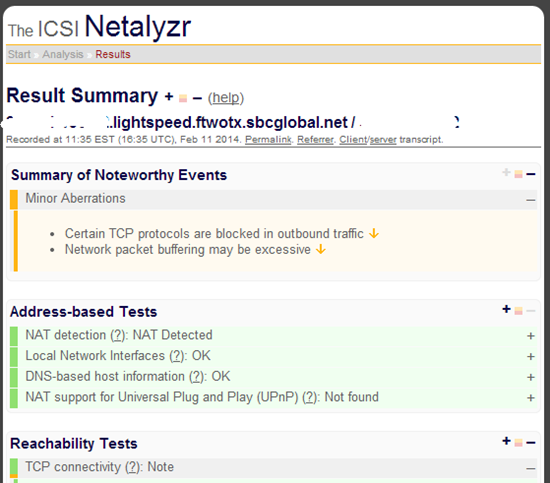 For both tests, it helps to run a baseline report during off-peak hours and another report during times of peak usage.  It’ll be easy to see what type of blocking is being utilized and whether certain kinds of traffic (e.g. web browsing, FTP) are being transmitted at a faster speed than others (e.g. video streaming services).

Pretty much anything which changes your route to a less congested one will fix the problem.  The typical solution is to use a VPN service (e.g. VPNTunner, Metropipe,Hotspot Shield).  Some services are free while others charge a monthly fee.  Each will provide simple instructions for setting up their service.

A free IPv6 tunnel service will also work with lots of options on the table (some free).  Both he.net and gogo6 both offer IPv6 tunnel services.  The setup isn’t difficult and once connected, all your Netflix traffic will automatically route through the tunnel resulting in nice smooth playback even during peak viewing hours.  Furthermore, this will only affect IPv6 enabled services so you won’t be forcing all of your traffic through the tunnel like you would with a VPN.

Besides a VPN or an IPv6 tunnel, a regular HTTP proxy may help solve the problem and for the hardcore geeks, a VPS with tweaked router, firewall, and IPTables rules can circumvent the baddies throttling practices.

And finally, but most importantly, you can of course write your congressmen and let them know you support net neutrality laws that allow for good-old-fashioned “fair” competition between ISPs and Internet-related services.